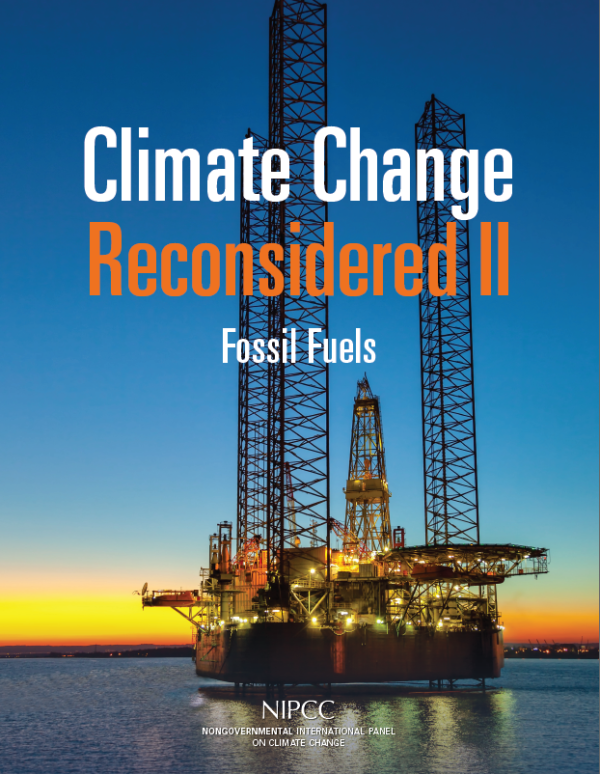 The current report, Climate Change Reconsidered II: Fossil Fuels, is a comprehensive and authoritative review of environmental economics, climate science, and policy analysis regarding the social benefits and costs resulting from the use of fossil fuels. This report summarizes scientific research presented in previous volumes in the series and adds new research published as recently as December 2018. This volume tracks and critiques the IPCC’s Fifth Assessment Report.

The NIPCC authors, building on previous reports in the series as well as new literature reviews, find that while climate change is occurring and a human impact on climate is likely, there is no consensus on the size of that impact relative to natural variability, the net benefits or costs of the impacts of climate change, or whether future climate trends can be predicted with sufficient confidence to guide public policies today. Consequently, concern over climate change is not a sufficient scientific or economic basis for restricting the use of fossil fuels.

The NIPCC authors do something their IPCC counterparts never did: Conduct an even-handed cost-benefit analysis of the use of fossil fuels. Despite calling for the end of reliance on fossil fuels by 2100, the IPCC never produced an accounting of the opportunity cost of restricting or banning their use. That cost would be enormous. Estimates of the cost of reducing anthropogenic greenhouse gas (GHG) emissions by the amounts said by the IPCC to be necessary to avoid causing ~2°C warming in the year 2050 range from the IPCC’s own estimate of 3.4% to as high as 81% of projected global gross domestic product (GDP) in 2050, the latter estimate nullifying all the gains in human well-being made in the past century. Cost-benefit ratios range from the IPCC’s own estimate of 6.8:1 to an alarming 162:1.

The NIPCC authors conclude, “The global war on energy freedom, which commenced in earnest in the 1980s and reached a fever pitch in the second decade of the twenty-first century, was never founded on sound science or economics. The world’s policymakers ought to acknowledge this truth and end that war.”

Chapter 1 describes how economic principles can be applied to environmental issues. The authors explain how economists use observational data (prices, profits and losses, investment and consumption decisions, etc.) to measure and monetize costs and benefits, to understand how people respond to and solve challenges, and to understand why private as well as government efforts to protect the environment sometimes fail to achieve their objectives.

Chapter 2 updates the literature review of climate science in previous CCR volumes. Most notably, the authors say the IPCC has exaggerated the amount of warming likely to occur if the concentration of atmospheric carbon dioxide (CO2) were to double and such warming as occurs is likely to be modest and cause no net harm to the global environment or to human well-being.

Chapters 3, 4, and 5 catalogue the beneficial impacts of fossil fuels on human prosperity, human health, and the environment. These benefits are enormous yet missing from the IPCC’s massive tomes. Chapters 6 and 7 address two harms said to be created by the use of fossil fuels: air pollution and what the IPCC calls threats to “human security.” The NIPCC authors show the alleged effects of air pollution have been grossly exaggerated. Similarly, the IPCC’s own literature review shows how weak is the case for claiming climate change intensifies risk factors such as loss of property and livelihoods, forced migration, and violent conflict.

Chapter 8, the final chapter of the book, critiques the IPCC’s claim that the cost of reducing the use of fossil fuels is justified by the benefits of a slightly cooler world a century hence. New cost-benefit analyses of climate change, fossil fuels, and regulations demonstrate how adaptation to climate change is invariably the better path than attempting to mitigate it by reducing greenhouse gas emissions.

Dr. Roger Bezdek is an internationally recognized energy analyst, president of MISI, a Washington, DC-based economic, energy, and environmental research firm, co-founder of energy technology firm Cavendish Energy, and Washington editor of World Oil magazine. He is the author or coauthor of 13 books and his writing has appeared more than 300 times in scientific and technical journals, including Science, Nature, Energy Policy, Natural Resources Journal, and Public Finance. He earned a Ph.D. in economics from the University of Illinois at Urbana-Champaign, where he served as a faculty member from 1971 to 1974.

Dr. Craig D. Idso is founder and chairman of the Center for the Study of Carbon Dioxide and Global Change. Since 1998, he has been the editor and chief contributor to the online magazine CO2 Science. He is the author of several books, including The Many Benefits of Atmospheric CO2 Enrichment (2011) and CO2 , Global Warming and Coral Reefs (2009). His writing has appeared in The Quarterly Review of Biology, Energy & Environment, Geophysical Research Letters, Atmospheric Environment, Journal of Climate, Technology, and other science journals. He earned a Ph.D. in geography from Arizona State University (ASU), where he lectured in meteorology and was a faculty researcher in the Office of Climatology.

David R. Legates, Ph.D. is professor of climatology in the Department of Geography at the University of Delaware and an adjunct professor at the university’s Physical Ocean Science and Engineering Program and in the Department of Applied Economics and Statistics. Dr. Legates received his Ph.D. in climatology from the University of Delaware, and he has taught at the University of Virginia and served on the faculty at Louisiana State University and the University of Oklahoma. He has been a Research Scientist at the Southern Regional Climate Center, Chief Research Scientist at the Center for Computational Geosciences, and a Visiting Research Scientist at the National Climate Data Center. He has published more than 125 articles in refereed journals, conference proceedings, and monograph series and has made more than 250 professional presentations. His research has appeared in such journals as Academic Questions, Bulletin of the American Meteorological Society, Climatic Change, Geographical Review, Global and Planetary Change, Hydrological Processes, International Journal of Climatology, Journal of Atmospheric and Solar Terrestrial Physics, Journal of Climate, Journal of Geophysical Research, Journal of Hydrology, PLoS ONE, Proceedings of the National Academy of Sciences, Science & Education, Theoretical and Applied Climatology, and Water Resources Research. He has contributed to the Encyclopedia of Climate and Weather and Yearbook of Science and Technology. Legates is a Certified Consulting Meteorologist as recognized by the American Meteorological Society and, in 1999, was awarded the Boeing Autometric Award for the best paper in image analysis and interpretation. He has been asked to give expert testimony to the US Congress on five separate occasions.

Dr. S. Fred Singer is one of the most distinguished atmospheric physicists in the United States. He established and served as the first director of the U.S. Weather Satellite Service, now part of the National Oceanic and Atmospheric Administration (NOAA), and earned a U.S. Department of Commerce Gold Medal Award for his technical leadership. He is coauthor, with Dennis T. Avery, of Unstoppable Global Warming Every 1,500 Years (2007, second ed. 2008) and many other books. Dr. Singer served as professor of environmental sciences at the University of Virginia, Charlottesville (1971-94) and is founder of the nonprofit Science and Environmental Policy Project. He earned a Ph.D. in physics from Princeton University.