Cart
$0.00 / 0 items
0
0
Clexit for a Brighter Future: The Case for Withdrawing from United Nations’ Climate Treaties 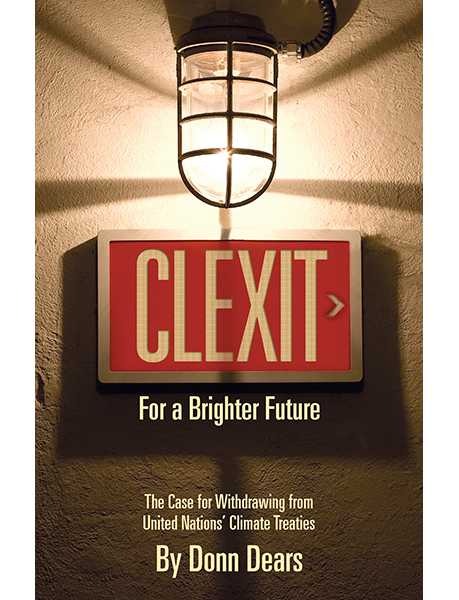 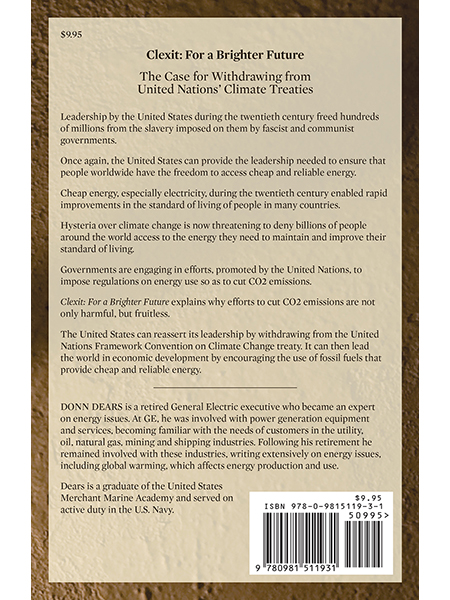 Clexit for a Brighter Future: The Case for Withdrawing from United Nations’ Climate Treaties

Clexit is a follow-up to Dears’ 2015 book, Nothing to Fear. Clexit book explains why the United States should withdraw from the United Nations Framework Convention on Climate Change (UNFCCC) treaty.

Dears describes the impossibility of cutting carbon dioxide (CO2) and other greenhouse gas (GHG) emissions enough to slow or stop climate change. Since the UNFCCC’s purpose is to “achieve, in accordance with the relevant provisions of the Convention, stabilization of greenhouse gas concentrations in the atmosphere at a level that would prevent dangerous anthropogenic interference with the climate system,” and since achieving that purpose is impossible, the United States should withdraw. Dears explains why participating in, and funding, a failed treaty is immoral.

Donn Dears began his career at General Electric testing large steam turbines and generators used by utilities to generate electricity; followed next, by manufacturing and marketing assignments at the Transformer Division. He led an organization of a few thousand people servicing these and other GE products in the United States. He then established facilities around the world to service power generation, transmission equipment and other electric apparatus. Later, he led an engineering department of several hundred people that provided engineering support to nearly a hundred service installations around the world.

At nearly every step, Donn was involved with the work done at customer locations: at steel mills, electric utilities, refineries, oil drilling and production facilities and open pit and underground mining operations. At every opportunity, he learned of the needs of these industries.

Donn has had a close-up view of the eastern province of Saudi Arabia with its oil producing and shipping facilities. He has investigated many of the other oil producing countries in the Mideast and Northern Europe, as well as examining iron-ore mining locations and major shipping centers in Europe and Asia. All told, Donn has visited over 50 countries and has knowledge of their need for the technologies that can improve their well being and their use of equipment manufactured in the United States.

Following his retirement as a senior GE Company executive, he continued to study and write about energy issues.

Donn is a graduate of the United States Merchant Marine Academy and served on active duty in the U.S. Navy.

Chapter 1, The UNFCCC, explains what the treaty is, what it aims to accomplish, and what it means for the United States.

Chapter 2, Worldwide CO2 Emissions, answers the question: Can CO2 emissions be cut 50% worldwide by 2050, or will there be a climate catastrophe?

Chapter 5, Comments on the UNFCCC Treaty, offers commentary on several provisions of the treaty.

Appendix 1 discusses the unworkability of carbon capture and sequestration

Appendix 2 discusses alternative uses of CO2, explaining, “Nothing is on the horizon to convert CO2 to some other product that would affect how to dispose of captured CO2 between now and 2050.”

Appendix 4 discusses the decline of nuclear power in the United States.

Appendix 5 is the text of the UNFCCC Treaty, annotated for easy reference to the comments made in Chapter 5.

1 review for Clexit for a Brighter Future: The Case for Withdrawing from United Nations’ Climate Treaties