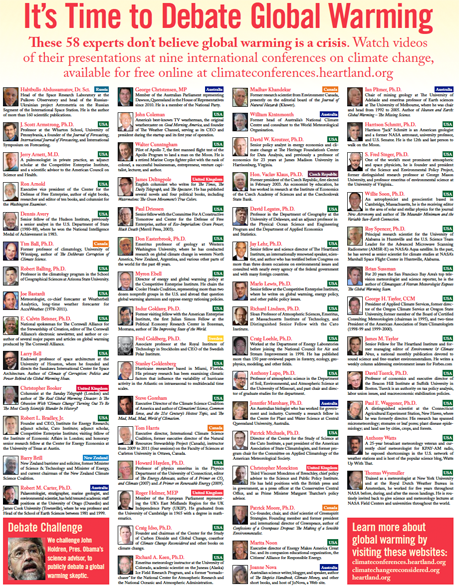 Global warming alarmists, including President Barack Obama and former vice president Al Gore, like to say the scientific debate over global warming is over. They claim “97% of scientists agree” human activity is causing a climate crisis and demand we move on to government-directed “solutions” to the crisis. But that “97 %” meme has been debunked many times. For example, see this op-ed in The Wall Street Journal by Joseph Bast and Roy Spencer:  “The Myth of the Climate Change 97%.”

So who are some of the scientists and other experts who do not believe global warming is a crisis? The Heartland Institute has produced a 16″ x 22″ poster with the faces, names, and titles of 58 such experts. They include current and former professors of climatology, geology, environmental science, physics, and economics at leading universities around the world.

This poster presents clear and undeniable evidence that the debate is not over. Looking out from this poster are 58 real experts on the causes and consequences of climate change. Each of them refutes the existence of a “consensus of scientists” on the size of the human impact on climate, or whether it merits immediate action. Many of these experts say the threat is grossly exaggerated, often to advance a political agenda.

Display this poster in your dorm room, on your office door, or on a community bulletin board. Spark conversations and debates by challenging political correctness. Explain the American people understand the debate over global warming isn’t over, no matter how many times politicians claim it is!

Makers and Takers: How Wealth and Progress Are Made and How They Are Taken Away or Prevented