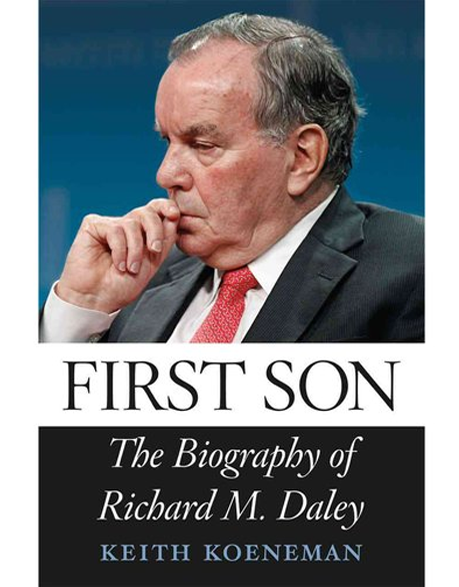 “Mayor Richard M. Daley dropped the bomb at a routine news conference at City Hall on Tuesday. With no prelude or fanfare, Mr. Daley announced that he would not seek re-election when his term expires next year. ‘Simply put, it’s time,’ he said.” New York Times, September 7, 2010

With those four words, an era ended. After twenty-two years, the longest-serving and most powerful mayor in the history of Chicago—and, arguably, America—stepped down, leaving behind a city that was utterly transformed, and a complicated legacy we are only beginning to evaluate.

In First Son, Keith Koeneman chronicles the sometimes Shakespearean, sometimes Machiavellian life of an American political legend. Making deft use of unprecedented access to key players in the Daley administration, as well as Chicago’s business and cultural leaders, Koeneman draws on more than one hundred interviews to tell an up-close, insider story of political triumph and personal evolution.With Koeneman as our guide, we follow young Daley from his beginnings as an average Bridgeport kid thought to lack his father’s talent and charisma to his unlikely transformation into an iron-fisted leader. Daley not only escaped the giant shadow of his father but also transformed Chicago from a gritty, post-industrial Midwestern capital into a beautiful, sophisticated global city widely recognized as a model for innovative metropolises throughout the world.

No They Can’t: Why Government Fails – But Individuals Succeed

Democracy Denied: How Obama is Ignoring You and Bypassing Congress to Radically Transform America – And How to Stop Him