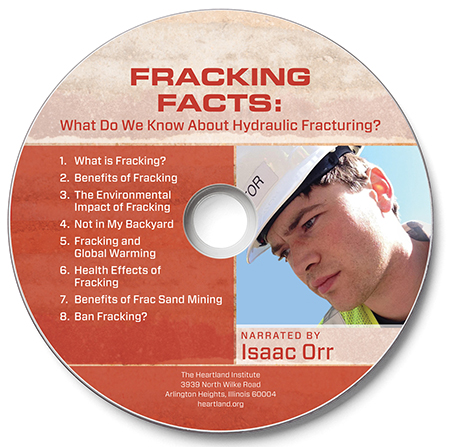 Isaac Orr, a Heartland Institute research fellow, narrates a series of eight 3-minute videos on hydraulic fracturing, better known as “fracking.” The video series highlights that fracking is beneficial because it increases our access to oil and natural gas. It is safe – it doesn’t pollute groundwater or cause earthquakes – and frac sand mining doesn’t produce air pollution or other problems.

The newfound abundance of domestic natural gas reserves promises unprecedented energy prosperity and security. In Pennsylvania alone, shale gas production has generated 90,000 jobs with an average pay of $62,000. Fracking has generated more than $600 million in tax revenues, and fracking has contributed $34 billion to the state’s economy.

Lower energy prices resulting from fracking have led to significant consumer benefits. According to the Energy Information Administration (EIA), the average U.S. household saved approximately $675 on gasoline in 2015 compared to 2014 because of lower oil prices. Additionally, a study by the Brookings Institution found low natural gas prices will save families anywhere from $181 to $432 per person, depending on geographic area they live in.

This video series was produced in conjunction with Free To Choose Media.

Isaac Orr is a research fellow for energy and environment policy at The Heartland Institute. Orr is a speaker, researcher, and writer specializing in hydraulic fracturing, frac sand mining, agricultural, and environmental policy issues. He graduated from the University of Wisconsin Eau Claire with studies in political science and geology, winning awards for his undergraduate geology research before taking a position as an aide in the Wisconsin State Senate, where he served as lead-office writer and as a policy advisor on frac sand mining and agricultural issues.

Be the first to review “Fracking Facts DVD: What Do We Know About Hydraulic Fracturing?” Cancel reply
Related products

Why Do some Futures Contracts Succeed and Others Fail?