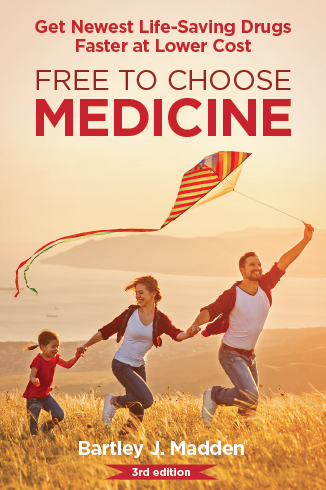 Would you support a reform that would make prescription drugs better, available sooner, at lower cost?

This third edition of Bartley J. Madden’s book Free To Choose Medicine describes how we can achieve this defining moment for America—a directional change from today’s trend of increasing litigation and regulation as well as a stake in the ground anchoring the undeniable truth that control of medical decisions belongs, first and foremost, with individual patients and doctors, not the government.

Bartley J. Madden retired as a managing director of Credit Suisse HOLT after a career in investment research and money management that included the founding of Callard Madden & Associates.

Madden’s early research led to the development of the CFROI valuation framework that is used today by money-management firms worldwide. Madden is a Policy Advisor for The Heartland Institute. Madden’s current research focuses on knowledge building and wealth creation as opposite sides of the same coin.

Madden’s latest book, Value Creation Thinking, focuses on how creating long-term value begins with clarity as to the purpose of the firm and management’s core responsibilities, and emphasizes the overriding importance of a knowledge-building culture. Knowledge building is the topic of his book, Reconstructing Your Worldview: The Four Core Beliefs You Need to Solve Complex Business Problems.

One idea concerns systems thinking and the identification of key constraints that degrade overall system performance. An application of systems thinking to public policy is reflected in Madden’s proposal to restructure the Food and Drug Administration, which is explained in his book Free To Choose Medicine: Better Drugs Sooner at Lower Cost. The fundamental principles of Free To Choose Medicine have already been implemented in Japan for regenerative medicine drugs (see FreeToChooseMedicine.com).

Breakthrough, transformative ideas are all too rare in politics, but this proposal is exactly that. By empowering America’s patients, doctors, and entrepreneurs, Madden outlines a free-market, bipartisan solution that could unleash a long-overdue wave of innovation in an American pharmaceutical industry long plagued by government control, industry bureaucracy, and high prices.
— Tim Huelskamp, Ph.D.
President, The Heartland Institute

Bart Madden brings to his task a thorough knowledge of the issues that must be confronted and a deep concern for improving the rules that govern FDA processes. It’s about defining an FDA track that empowers the patients and physicians who have the relevant knowledge and need the freedom to choose to use that knowledge without harming others. This is a book that can be studied fruitfully by all who have a concern for these problems. It is fundamentally bipartisan and should be read in that spirit.
— Professor Vernon L. Smith
Economic Science Institute, Chapman University
Nobel Laureate in Economics, 2002

Free To Choose Medicine is full of disturbing data about the unintended consequences of our nation’s quest for safe drugs seemingly without regard to cost. Bart Madden explains how we have lost sight of the goals of encouraging innovation, speed to market, and quick access for suffering patients, and he lays out a realistic plan for getting back on track.
— Hon. Jim DeMint
U.S. Senator – South Carolina

A provocative proposal that offers a libertarian solution for reform of the nation’s dysfunctional drug regulation.
— Henry I. Miller, M.D.
Former Director
FDA’s Office of Biotechnology

Many take for granted that government regulation is necessary to protect us from unsafe and ineffective drugs. Bart Madden’s important new book challenges that conventional wisdom and stands it on its head. He shows that it is we who need protection from a dangerous regulatory system that keeps too many innovative drugs off the market for too long. He also shows how greater freedom for patients and doctors can lead us out of this counterproductive regulatory process. Everyone with an interest in health policy should read this book. It deals forcefully with an issue that is, quite literally, a matter of life or death.
— Sam Peltzman, Ph.D.
Ralph and Dorothy Keller Distinguished Service Professor Emeritus of Economics
University of Chicago

Bart Madden shines a bright light on the all-too-invisible damage caused by the FDA’s self-protective, dysfunctional, and ultimately lethal drug approval process. He explains how the FDA bureaucracy protects itself while allowing millions of people to suffer and die who could be helped by faster access to the newest medicines. The FDA uses approval processes appropriate to an era of adding machines and not supercomputers. Madden offers a 21st century information-age solution in Free To Choose Medicine that would give consumers control over health decisions, allow faster access to life-saving and life-enhancing drugs, and ultimately reduce the cost of new medicines. This concise book explains how to keep the FDA monopoly from stifling innovation and crippling the life sciences industry. Madden offers the right cure for the ailing FDA.
— Grace-Marie Turner
President
Galen Institute

Madden’s book is an excellent summary of the arguments many of us have made to suggest the need for change in the hidebound FDA-regulated drug development system. Dual Tracking and Freedom to Choose are specific proposals of real interest. Unfortunately, in addressing the problems in our drug development system for over 25 years, I have seen no credible evidence that the FDA has any interest in substantial change. The FDA responds (if they do at all) to critics with lip service, obfuscation, or intimidation. I hope Bart Madden’s book will elicit a real response and debate leading to substantial change that will benefit patients.
— Robert K. Oldham, M.D.
Cancer Cellular Therapeutics, Inc.

As [President Barack Obama] promotes his plan to increase the role of government in our healthcare, this timely and topical book brings some very important new ideas to the debate. By allowing individuals to contract with drug developers so they can gain access to innovative drugs that have completed safety trials, Americans will have the opportunity to live longer and healthier lives. The cost of new drugs will decline and research and development into new treatments will increase. It is a must-read for all legislators and the general public.
— Sally C. Pipes
President
Pacific Research Institute