Cart
$0.00 / 0 items
0
0
The Patriot’s Toolbox: One Hundred Principles for Restoring Our Freedom and Prosperity 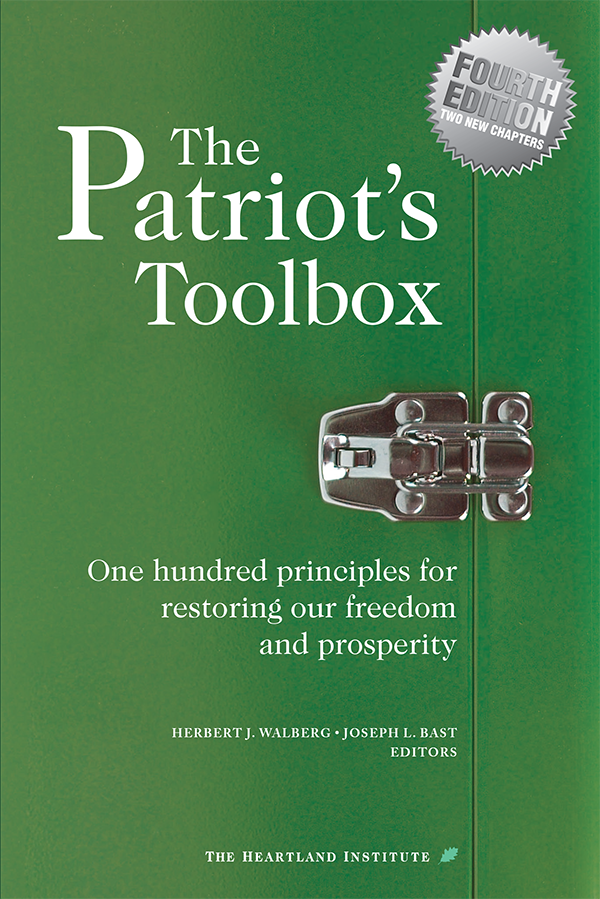 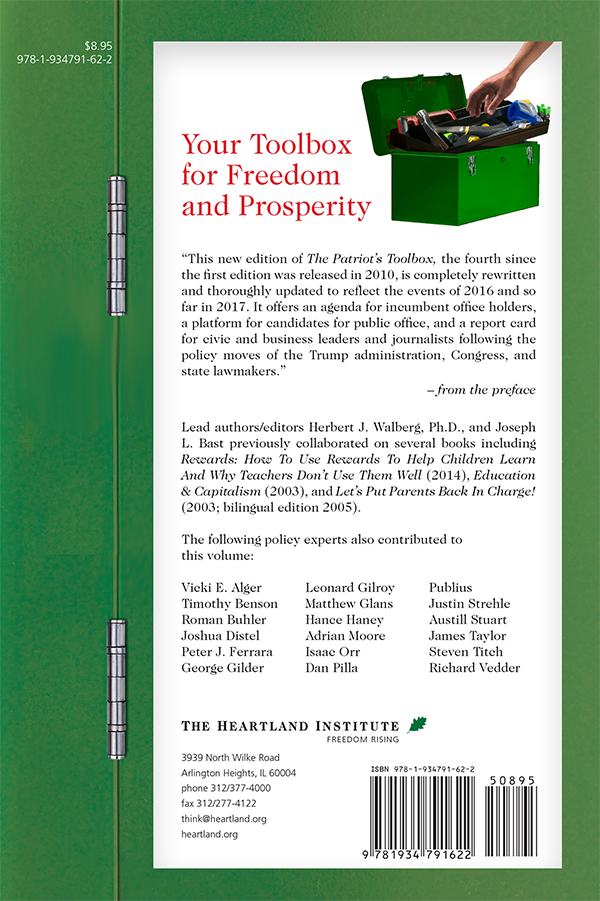 The fourth edition of The Patriot’s Toolbox presents 10 key issues for America’s future, and 10 principles for each of those issues every liberty-loving American needs to understand. In short, the book offers “an agenda for incumbent office holders, a platform for candidates for public office, and a report card for civic and business leaders and journalists following the policy moves of the Trump administration, Congress, and state lawmakers.”

Coauthored and edited by Herbert Walberg, Ph.D. and Joseph L. Bast, with contributions from 18 other distinguished policy experts, the book covers ten of the most important topics being debated today:

Nearly 13,000 complimentary copies of the book were sent in early November to influential audiences across the country, including every state elected official and member of Congress, thousands of civic and business leaders, and the media. More than 100,000 copies of the first three editions of The Patriot’s Toolbox were distributed since 2010, making it one of the most widely circulated and influential books on public policy in the United States. The new edition is completely rewritten and thoroughly updated to reflect the events of 2016 and so far in 2017.

Herbert J. Walberg is distinguished visiting fellow at Stanford University’s Hoover Institution and chief scientific advisor to the Center on Innovation and Improvement.

Joseph L. Bast cofounded The Heartland Institute in 1984, served as president and CEO until July 2017, and currently is CEO.

Vicki E. Alger is a research fellow at the Independent Institute in Oakland, California, and author of the book Failure: The Federal Misedukation of America’s Children.

Timothy Benson is a policy analyst at The Heartland Institute.

Roman Buhler is national director of the Madison Coalition.

Joshua Distel is an executive assistant and office manager at the Buckeye Institute.

George Gilder is chairman of Gilder Group, Inc. and a senior fellow at Seattle’s Discovery Institute.

Leonard Gilroy is director of government reform at Reason Foundation.

Matthew Glans is senior policy analyst for The Heartland Institute.

Hance Haney is director and senior fellow of the Technology & Democracy Project at the Discovery Institute.

Adrian Moore is vice president of policy at Reason Foundation.

Isaac Orr is a research fellow for energy and environment policy at The Heartland Institute.

Daniel J. Pilla is a tax litigation consultant and executive director of the Tax Freedom Institute, a national association of tax professionals.

Publius is a professor at a United States university.

Justin Strehle is completing a master’s degree in financial economics from Ohio University.

Austill Stuart is a policy analyst at Reason Foundation.

James M. Taylor is president of the Spark of Freedom Foundation and a senior fellow for environment and energy policy at The Heartland Institute.

Steven Titch is a journalist-turned-policy analyst focusing on tele-communications, internet, and information technology.

Richard Vedder is distinguished professor of economics emeritus at Ohio University and founding director of the Center for College Affordability and Productivity.

Chapter 6: Firearms
1. Americans have an individual right to keep and bear arms.
2. Bans on “assault weapons” are incoherent and self-defeating.
3. An increase in the number of guns does not lead directly to more gun crime.
4. Firearms possession among law-abiding citizens deters crime.
5. Defensive gun use saves lives.
6. Right to carry laws do not increase crime and may generate social benefits.
7. “Stand Your Ground” laws have been the historical norm in the United States.
8. The risk of firearms accidents is low and falling.
9. Large-scale illegal gun-running is a myth.
10. International experience does not support gun control in the United States.

Chapter 9: Federal Tax Policy
1. Tax codes should be simple and understandable.
2. Collect taxes in the least invasive manner.
3. Make tax collection efficient.
4. Make the tax code stable and predictable.
5. Taxes should not be hidden from taxpayers.
6. The tax code should be neutral.
7. Taxes profoundly affect economic growth.
8. The broader the tax base, the better.
9. Everyone should pay the same income tax rate.
10. Perhaps it is time to repeal the income tax.

Chapter 10: Constitutional Reform
1. The national government is out of control.
2. Constitutional reform is the solution.
3. Fear of a runaway convention is unfounded.
4. Choose amendments carefully.
5. Agree on convention procedures ahead of time.
6. Require Congress to balance its budget.
7. Consider the Compact approach.
8. Require congressional approval of major regulations.
9. Require due process for all administrative law proceedings.
10. States can refuse to enforce federal laws.

7 reviews for The Patriot’s Toolbox: One Hundred Principles for Restoring Our Freedom and Prosperity