Cart
$0.00 / 0 items
0
0
Power to the People: The New Road to Freedom and Prosperity for the Poor, Seniors, and Those Most in Need of the World’s Best Health Care 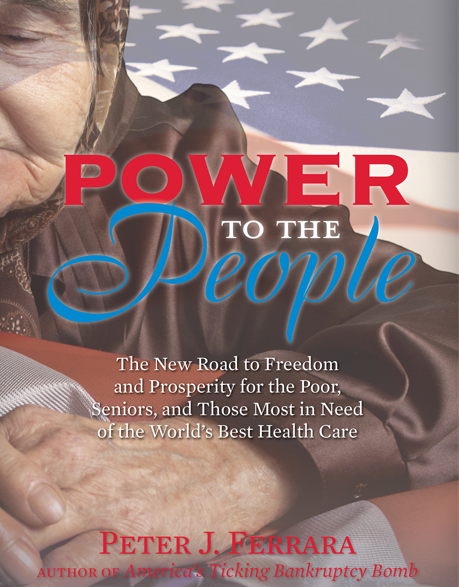 Power to the People: The New Road to Freedom and Prosperity for the Poor, Seniors, and Those Most in Need of the World’s Best Health Care

The failure of the nation’s entitlement system cries out for an entirely new approach. Instead of the negative politics of cutting benefits for the poor, seniors, and those who need health care, the increased productivity and market incentives of pro-growth entitlement reform would result in better benefits and incomes for the poor and seniors, and better health care for the sick. At the same time, pro-growth entitlement reform would reduce taxes and government spending by the greatest amounts in world history.

This book presents a comprehensive entitlement reform agenda. These reforms are all positive and populist, producing far better results for the poor, seniors, and those who need health care. Over a generation, these reforms would reduce federal taxes and spending by at least half from what they would be otherwise. They are all proven reforms that have been tried and have worked spectacularly in the real world.

The proposed reforms are not only politically feasible: They would be politically popular as well. They are fundamentally based on the concept of individual choice. These are the reasons why the title of this book is “Power to the People.”  Elected officials who have run on these themes and ideas have won elections in the past and will in the future. Those who oppose these reforms are on the losing side of history.

These reforms would contribute to far greater economic growth and prosperity for all. They are the key to enabling the United States to avoid the financial catastrophe of Greece and other European social-welfare states. This is what makes entitlement reform more than politically winnable. It is absolutely necessary to saving our country from ruin.

CLICK HERE to listen to Peter Ferrara on the Mark Levin Show talking about Power to the People. (Re-broadcast as part of the The Heartland Daily Podcast.

Ferrara has written studies and reports for the Cato Institute, Heritage Foundation, National Center for Policy Analysis, Family Research Council, U.S. Chamber of Commerce, and many other institutions. He has published articles in The Wall Street Journal, Barron’s, Forbes, The American Spectator, National Review, Human Events, The Weekly Standard, Policy Review, and elsewhere.

Ferrara is also the author or coauthor of the following books:

Be the first to review “Power to the People: The New Road to Freedom and Prosperity for the Poor, Seniors, and Those Most in Need of the World’s Best Health Care” Cancel reply
Related products

Let’s Put Parents Back In Charge! (English And Spanish Edition)