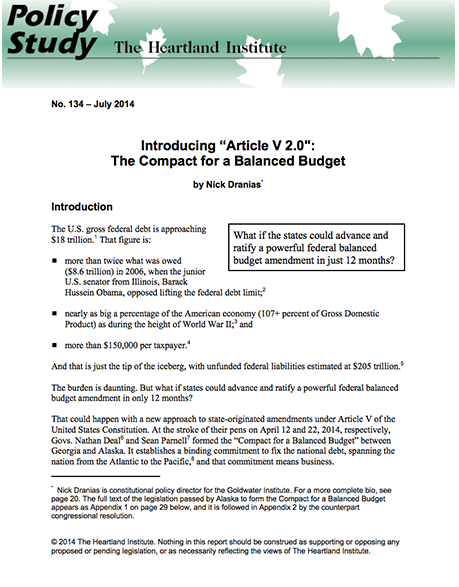 Introducing ‘Article V 2.0’: The Compact for a Balanced Budget

As the federal debt approaches $18 trillion, a balanced budget amendment has emerged as one of few viable options to curb government spending. The Article V process for amending the U.S. Constitution, however, is long and tedious.

In a new report for The Heartland Institute, Nick Dranias, a constitutional law expert, asks the question, “[W]hat if the states could advance and ratify a powerful federal balanced budget amendment in just 12 months?” The “Compact for a Balanced Budget” could accomplish that task, “changing the political game almost immediately,” writes Dranias in “Introducing ‘Article V 2.0’: A Compact for a Balanced Budget.”

Dranias notes, “without an interstate compact, the Article V convention process would require at least 100 legislative enactments, six independent legislative stages, and five or more years of legislative sessions to generate a constitutional amendment.” The compact approach instead uses “the ‘secret sauce’ of conditional enactments” to consolidate and simplify the convoluted Article V procedures. Dranias cites precedents and elucidates the intentions of the Founding Fathers to justify the constitutionality of the compact process.

If a compact-driven balanced budget amendment is adopted, Dranias concludes:

Washington will no longer have the ability to set its own credit limit and write itself a blank check. The states would become an active board of directors charged with keeping an eye on our wayward federal CEO and staff. Debt would become scarce. Priorities would have to be set. Sustainable federal programs would have to become the norm. A broad national consensus – not midnight-hour panic – would have to support any further increases in the national debt.

Nick Dranias is director of policy development and constitutional government at the Goldwater Institute. He led the institute’s successful challenge to Arizona’s system of government campaign financing to the U.S. Supreme Court. He is currently representing the City of Tombstone in a fight to protect its 130-year-old municipal water supply from U.S. Forest Service overreach. He has authored numerous scholarly articles in law reviews in addition to penning a number of public policy reports.

Be the first to review “Introducing ‘Article V 2.0’: The Compact for a Balanced Budget” Cancel reply
Related products